Journeys of a Lifetime, Second Edition: 500 of the World’s Greatest Trips 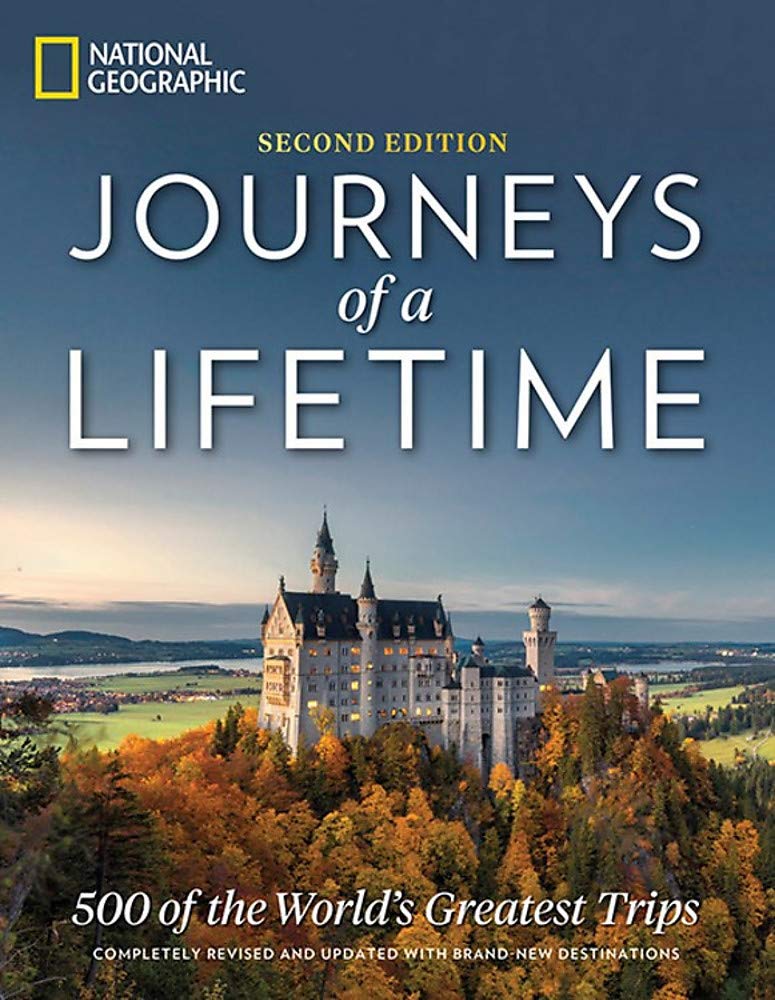 Traditional longtail boats sit at anchor in the turquoise waters of the Andaman Sea, off Thailand’s western coast. You can take a six-day junk cruise through the sea, visiting some of its 3,500 islands.

Discover 500 of the World’s Greatest Trips

Featuring 120 new destinations, this best-selling inspirational travel guide reveals 500 celebrated and lesser-known destinations around the globe, from ocean cruises in Antarctica to horse treks in the Andes. Each chapter features stunning photography, full-color maps, and practical tips, including how to get there, when to visit, and how to make the most of your journey. Informative and inspiring, this luxurious volume is a lifelong resource that readers will treasure for years to come.

Curiosity is the gift we were born with. It’s the most important thing to bring on any journey, and is a quality that rewards us throughout our lives. But even the most inquisitive travelers hunger for a spark of inspiration now and again—and that’s where this magical book comes in. More than just a collection of alluring places, it’s a treasury of reasons to visit them now. This book is about what happens when our curiosity runs wild.

Every Walk Begins With A Single Step…

Thousands of years of river water wearing away at faults in the rock have created this wondrous twisting “slot” canyon, running across the border between Utah and Arizona. As you enter it from White House, Utah, you vanish into a fantastical world, where sunlight seeping down from above creates unusual plays of light and dark on its high, sculpted red-rock walls. In places, the cliffs are only a few yards apart and rise up to 1,000 feet on either side. At—and often around—your feet, the Paria River (“muddy water” in the Paiute language) flows fast over sand and boulders. From time to time, you pass a tree sprouting from the rock with a mini Garden of Eden of greenery and wildflowers spreading out around it. As night falls, you find a ledge to camp on, and the next day it starts all over again.

Sacred and snow-capped, Fuji-san—rising 12,388 feet above sea level—is a dormant volcano, its image immortalized by the printmaker Hokusai in “Thirty-Six Views of Mount Fuji.” The most popular starting point is Kawaguchiko 5th Station, more than halfway up the mountain, where tourists and locals congregate, creating a sense of camaraderie as they get ready for the nighttime trek to watch the dawning of the day. The trail winds upward, with long sections of steep steps that take a toll on calf muscles. As you climb, the forest known as Aokigahara (Sea of Trees) falls away and you enter a moonscape of rocks and shrubs. Look up and you will see a pristine night sky dusted with the Milky Way. The temperature drops quickly, and the rest stops and huts become more frequent. A pinpoint of sun pierces the horizon, pauses, then explodes with light, and bathes the vast panorama of metropolitan Tokyo in its morning glow.

Set in the heart of New Zealand’s North Island, Tongariro National Park is home to three active volcanoes: Ngauruhoe, Ruapehu, and Tongariro. It owes its existence to Te Heuheu, Chief of the Ngati Tuwharetoa Maori nation, who gifted the land to the New Zealand government in 1887 to protect it from farmers and loggers. The area is a paradise for hikers. From the Mangatepopo Valley, the trail climbs bare volcanic rock in steep zigzags to the rim of South Crater. To the south the towering mass of Ngauruhoe looms, its top venting steam and smoke in a steady stream. After crossing the flat expanse of South Crater, another steep climb leads along an exposed ridge to the Red Crater, where a hot upward draft reminds you that you are walking on a very active volcano.

A journey on foot is the purest and simplest of pleasures. Walking offers perfect freedom—no tickets, no timetables, no limits apart from those geography or your own desire dictates. An amble around New York’s Greenwich Village becomes a journey into the lives of famous artists and writers. A few hours browsing through Istanbul’s Grand Bazaar becomes a treasure hunt through time and space—as well as a lesson in the art of bargaining. At the other end of the spectrum are demanding wilderness treks, taking days or weeks to accomplish. Peru’s Inca Trail literally rises above the clouds on its way to the Lost Citadel of the Inca Empire. In between lies a world of inviting hikes, from the Great Wall of China to California’s John Muir Trail. No other form of travel brings you so close to nature, including human nature. And no other form is so kind to the planet—nor so satisfying to body, mind, and soul.

Hurricanes such as Katrina in 2005 have altered the cultural and physical profile of New Orleans and its environs, but the lower Mississippi River and its legendary maritime traffic keep on rollin’. Traveling upriver from New Orleans to Memphis, you experience the living history of America’s largest river, aboard one of the signature relics of a bygone age—a stern-wheeler steamship, updated with such modern comforts as large staterooms and fine food.

Charleston and the Lowcountry Cruise

This ravishing realm of sea islands, gracious antebellum towns, and wildlife-filled salt marshes is known as the Lowcountry—one of the United States’ most mysterious and compelling regions. The ship is small—more a large motor yacht than a cruise liner—and the scale of things intimate as you head south from historic Charleston, hugging the shoreline along the blue highway of the Atlantic Intracoastal Waterway.

From high up in the mountains of Tibet, the vast Mekong River winds its way for almost 2,500 miles through seven countries—but it is at its most beautiful sliding through the dark green, misty hills of Laos. Reject the roaring, high-powered “fast boats” and opt for a brightly colored wooden “slow boat.” Once you’ve got used to the puttering engine bolted to the back of the vessel, you can spend hours gazing out at the rolling forested hills and paddy fields and allow your mind to wander.

At sunset, tall silvery red gum trees cast long shadows across the golden surface of the Murray River. This leisurely cruise takes you through the sunbaked landscapes of South Australia. By day, the boat glides past scenery that ranges from sheer limestone cliffs to fragrant, golden-green citrus fruit orchards. In the evening, you disembark to spend the night in one of a succession of comfortable hotels. You may also see an excited angler landing a Murray cod, one of the world’s largest freshwater fish, which regularly grows to more than 3 feet (1 meter) in length.

A Year in Provence

Wild: From Lost to Found on the Pacific Crest Trail

The Travel Book: A Journey Through Every Country in the World (Lonely Planet)

The Unseen Body: A Doctor’s Journey Through the Hidden Wonders of Human Anatomy

Added to wishlistRemoved from wishlist 0
$14.99

Journeys of a Lifetime, Second Edition: 500 of the World’s Greatest Trips